Hey, did you hear that Nissan is finally revamping the Frontier? We're ready for an update! The last major redesign was 2005, and the last facelift was in 2011. That means the latest Frontier models look sorely outdated with circa-2011 interior designs and technology, especially compared to their ultra-modern competition.

What We Know So Far

Nissan has shared a few features we’ll find in the 2018 Frontier:

If you ask us, the 2018 Frontier sounds pretty promising. There are a few other things we're hoping to see in the next Frontier, though. We'd like to see it brought to date with Nissan's latest in-car technology, such as satellite navigation and the NissanConnect system with mobile apps.

This may be Nissan’s last chance to put the Frontier back on the map. The long overdue redesign has a lot of us Nissan fans on the edge of our seats, and the internet is abuzz with theories and educated guesses alike on the next Frontier model.

What Industry Experts Think the 2018 Frontier Will be Like

We can only speculate right now about its entire appearance and functionality; however, the Navara, Nissan's pickup truck for overseas markets, just went through a major overhaul. Some industry experts believe that’ll be the basis of the new Frontier.

Before we get into the details, let’s look at one of the renderings TopSpeed.com created of the possible 2018 Frontier design: 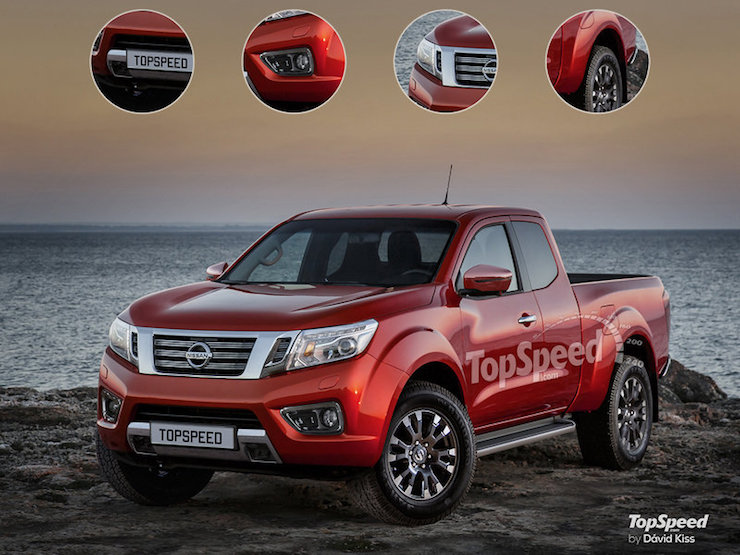 In this rendering, you can see the features Nissan confirmed to be in the next model, such as the lower body, dark chrome fog lights, and a beautiful chrome finish. It looks more like the 2017 Navara than it does the 2017 Frontier, but it’s actually a mash-up of the two.

TruckTrend.com believes that the Frontier will look more “trucky” than the Navara. They also predict that it’ll come with bolder fender flares and a sturdier, more rugged lower front fascia.

If you ask TopSpeed about their prediction on the exterior, they’ll tell you that Nissan will add fancy cargo bed technology like built-in cargo rails and bed dividers. They also predict seeing bed extenders, more tie-downs, easily accessible tow hooks, and LED lights on the 2018 Frontier. Adding most, if not all, of these features would be a smart move on Nissan’s part, actually. Let’s hope they do it!

Industry experts are pretty positive Nissan will amp up the luxury factor of the interior with updated features. TopSpeed somewhat disagrees. They wrote that Nissan may make the dashboard look "brutish" with larger knobs and buttons and a four-spoke steering wheel. They're also hoping for front bucket seats and a flat load floor in the rear cab.

Torque News believes that some of the higher-level trims will feature cutting-edge technology like the 360-degree Around View Monitor and rear parking sensors.

It's even possible that the Frontier's interior will be an exact replica of the new Navara's car-like interior, which has luxurious elements. The interior is anybody's guess. We'll have to wait and see.

TruckTrend.com wants Nissan to keep the low-end torque found in previous Frontier models instead of powering the 2018 model with a car-derived engine.

TopSpeed agrees. They're hoping that Nissan will take the current 4.0L V-6 motor in existing Frontiers and thoroughly rework it to produce more power and consume less fuel. They also predict that consumers will get to choose between a six-speed manual transmission and a seven-speed automatic transmission.

As far as fuel economy goes, Torque News thinks that the pickup will sport a slightly above-average mileage. They suggested that Nissan should enlist the latest fuel saving technology, such a 2.8L Cummins diesel motor, an improved four-cylinder motor, or an increased V6 or V8 towing capacity.

Nissan has yet to announce the release date, but we believe it’ll be in the first quarter of 2018. The new pickup might start at a low price, perhaps even under $20,000.

Do you agree or disagree with the speculation surrounding the upcoming Frontier model? What are your hopes for it? Let us know on Facebook!